The day began like most days, with me being displeased by the appearance of my hair.


I had reached the point in the interview process where it was time for me to submit a professional visa photograph. I was warned, perhaps somewhat unsurprisingly, that the Japanese authorities would be quite meticulous in ensuring that the photo met their standards. Furthermore, it was made clear that an error on the part of a pharmacy photographer, would not constitute an excuse on the part of the applicant.

This meant that it was my responsibility to ensure the photographer's comprehension of the guidelines. The challenge in doing so, is that most pharmacy's passport photo machines are limited by whatever country's template is pre-loaded into it, and in the case of a Japanese passport, the dimensions are not the same as a Japanese visa. Whatever technician would assist me, would have to be willing and able to provide my photo with a custom adjustment and cropping beyond their standard operating procedures.

For this reason, I was told to bring a ruler, and to trust only my own measurements.

The first several attempts to photograph me, did in fact fail to meet the measurement guidelines.


Worse yet, the photographer was growing increasingly frustrated with me each time.

I did my best to bring as much levity to the situation as possible. I maintained my smile and friendly demeanor in an attempt to delay them giving up on me, which I felt was coming at any moment. In a desperate attempt at keeping things going, I declared that I would be happy to pay for each unacceptable photograph. It was in truth, a bluff, and unfortunately, one that they we were too eager to call.

So after many minutes, and many dollars, I was at last presented with a set of photos that lived up to my ruler scrutiny. While I was of course, displeased with how I looked, they would have to do.

As New York City was experiencing record low temperatures that week, I once again donned my many layers and headed back out into the frozen tundra, believing that at least I wouldn't have to spend anymore time outside today. Unfortunately, this would not be the case.

I was in such a hurry to finally exit the uncomfortable photography session, that I had overlooked a grievous error.


In addition to an overall sloppy appearance, my tie was undone. 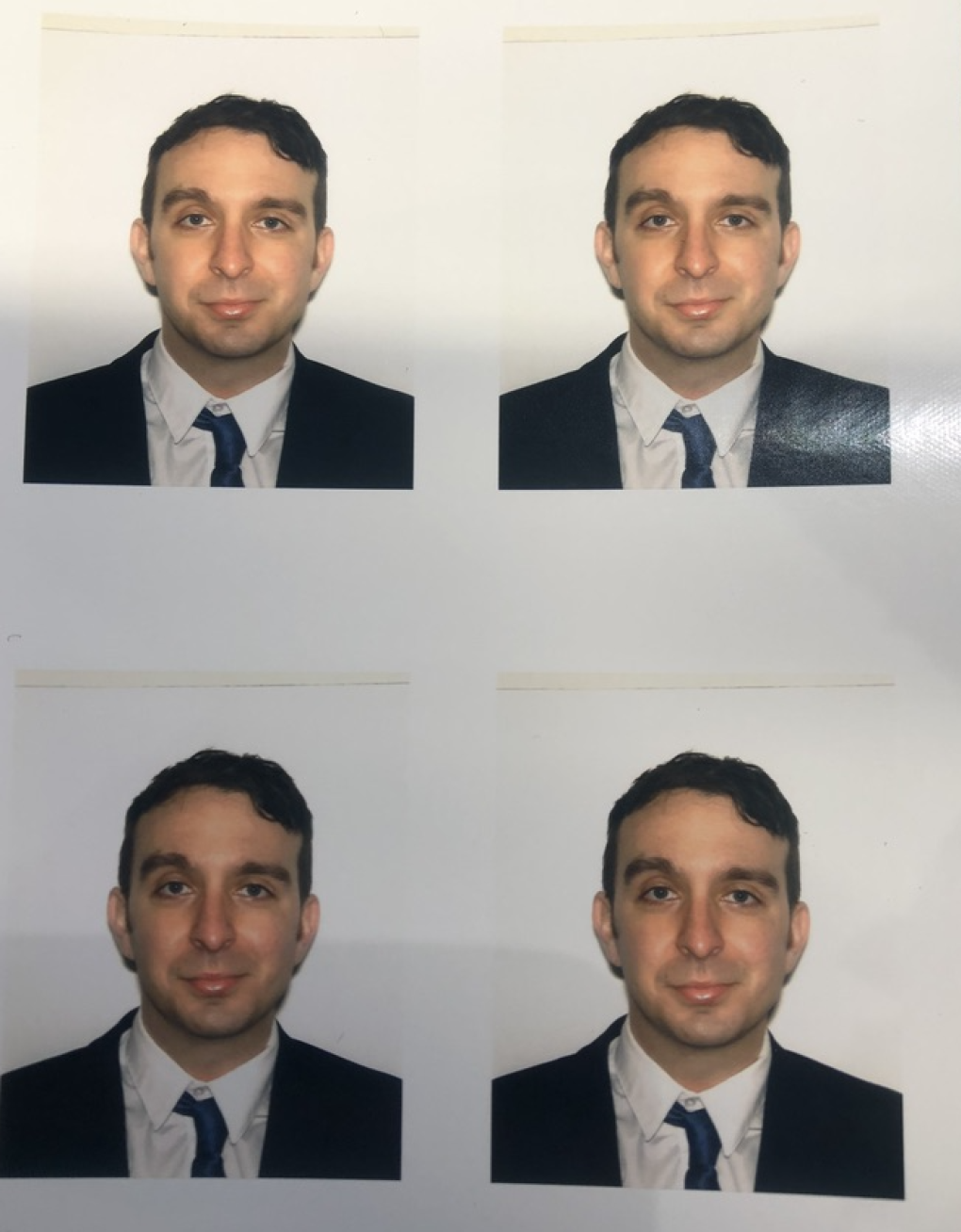 There's nothing quite like thinking how happy you are that you won't ever have to do something again, only to realize shortly afterwards that you are in fact, about to have to do it again.

There's also nothing quite like an undone tie to show one's attention to detail and willingness to adhere to the rules.

I paused and considered the fact that maybe I was once again being paranoid, perhaps I was putting too much emphasis on a small formality that would otherwise have no bearing on my hiring process. Surely such a small detail would be overlooked.

I was back out the door within seconds.


I was greeted by the same pharmacy photographer with an expression that could only be described as one of utter dejection. I have to say that seeing someone react that way to simply seeing my face was an entirely new and damaging experience for my already delicate self-esteem. Nevertheless, I was there for a reason, and this time I was determined to finish the quest once and for all.

I decided to put the blame on an imaginary boss who had rejected the original photo due to the tie situation. I figured that this way, I would appear less like the customer with strange demands, and more like just another unwilling participant in the arduous task. It seemed to work, because once I was able to shift that dynamic, I soon found myself back in front of the camera.

Now, if it seems like this is an extraordinary amount of effort for a not so extraordinary result, it's important to remember that this is not a byproduct of Japan's strict guidelines, but rather a failure on the ability of the average passport photo machine to accommodate them. The rules were in fact quite simple to follow, I just had limited access to a professional grade printer that could conform to them.

This is due to the fact that it's just not the size of the photo, but also the amount of space one's head takes up inside the frame, as well as the distances between the head and the borders. 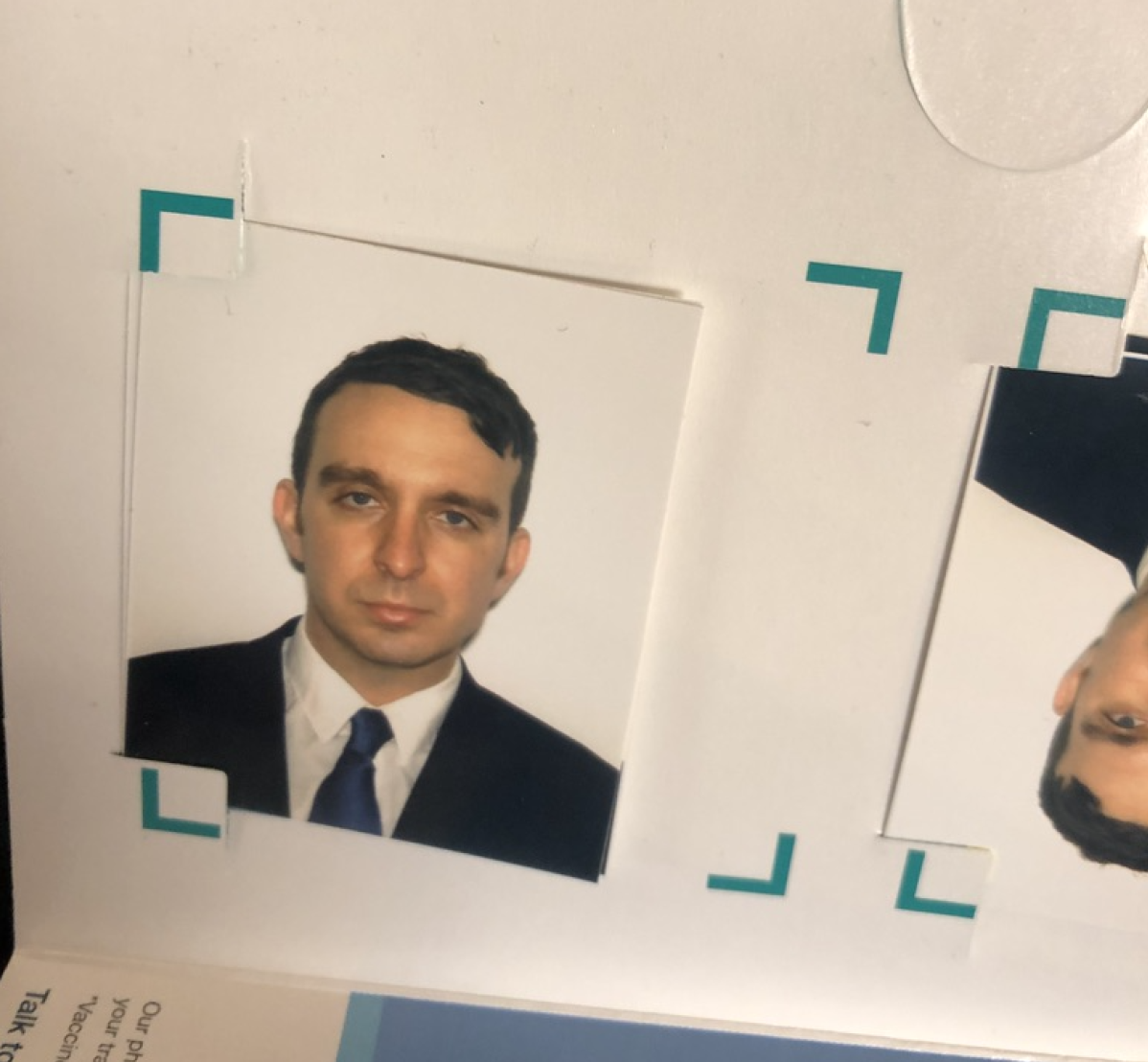 So after several hours and several frigid trips back and forth across Times Square, I was now in possession of these lovely momentos.

Despite looking a bit like I had just been arrested for financial crimes, I was finally in possession of suitable visa photos.


Of course this sullen expression now led me to stress over whether I looked too miserable to hire, but I was out of time, and out of cash. I did not protest when I was asked to pay for the bad photos after all. I saw it as a fair price just to have the ordeal over with. Furthermore, in comparison to my first batch of photos, the improvement was quantifiable enough to justify going through the process a second time.

While it's impossible to say what effect this photo had on my hiring decision, it's equally impossible to dismiss any of my extra efforts as unnecessary, because I did ultimately get the job. So if you've found yourself on this page as someone looking for advice on how to do the same thing, I'll leave you with the same sage advice that my recruiter gave me.

Bring a ruler, trust only your own measurements, and follow the instructions given as if they were gospel.

With a bit of determination, and the willingness to spend just a bit more time and money than you had originally planned on, you'll be just fine.

Kanji, experiencing illiteracy as an adult.

Too Much Time on my Hands

No results for your search, please try with something else.